After dropping her latest single, “7 Rings,” singer Ariana Grande celebrated by getting some new ink on her hand. But Ariana Grande’s new kanji tattoo doesn’t say what it’s supposed to, Kotaku reports, and fans were quick to point out the misspelling. In a now deleted Instagram post, Grande posted the tattoo, which reads 七輪 (shichirin), says Kotaku, and translates to “charcoal grill” rather than “7 rings” when the two kanji characters are combined. Grande’s explanation was that she left out the necessary characters, but that her new ink “still looks tight,” Kotaku reports.

But what would have looked even tighter is if the translation had been completely correct. Because even pop stars like Grande have a responsibility to not appropriate other cultures no matter how cool they think those cultures are.

While 七 (shi/nana) means “seven” and 輪 (rin/wa) does mean “hoop,” “circle,” “ring,” or “wheel,” according to Kotaku, when the two kanji characters are combined, the meaning changes to the word “shichirin,” which means a small charcoal grill. The correct spelling for “seven rings” is 七つの指輪 (nanatsu no yubiwa), says Kotaku, which Grande’s team in Japan has been using. 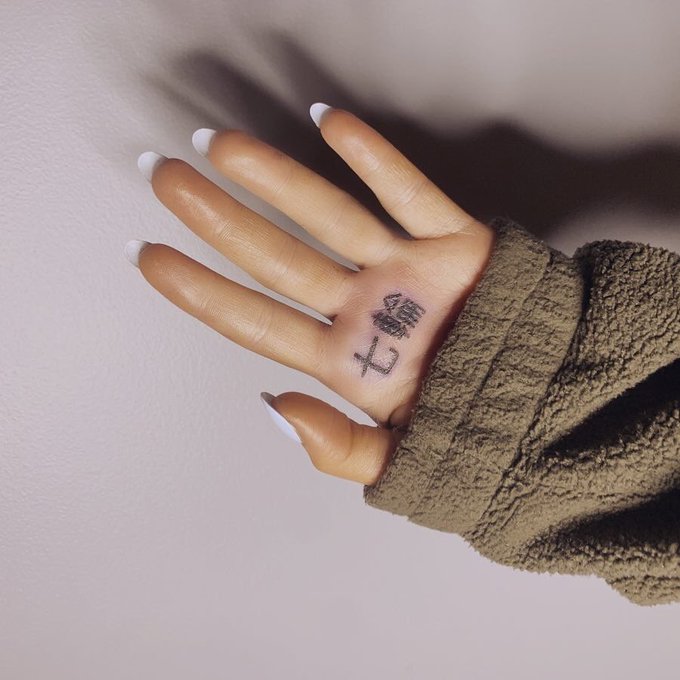 6,686 people are talking about this

Grande isn’t the first celebrity to ignore cultural significance when decorating her body. Performer Selena Gomez was criticized for wearing a Hindu bindi on her forehead as a fashion statement during the 2017 MTV Movie Awards, The Wrap reports. And pop star Katy Perry apologized twice for cultural appropriation for her geisha-themed performance at the 2013 American Music Awards and for wearing cornrows in her This Is How We Do music video, according to The Wrap.

The reality is that no one is exempt from respecting other cultures, no matter how big or famous they get. Pop stars have just as much a responsibility as everyone else to understand how certain symbols from different cultures — whether it’s a hairstyle, an article of clothing, or a piercing — have been used as weapons of oppression, and that’s what makes wearing them without understanding their meaning cultural appropriation.

There’s nothing inherently wrong with getting a kanji tattoo; in fact, my first tattoo was a kanji tattoo of my name. But there’s definitely a way to get a tattoo without being culturally appropriative. My mom is Japanese, and my dad is American, and they wanted me to have a name that was unique to both the United State and Japan. Mika is normally spelled 美香, which means “beautiful fragrance.” But my mom changed the second character to 美花, changing the meaning of my name to “beautiful flower.” Both are pronounced exactly the same, but the change in a single kanji character completely changed the meaning of my name. Sound familiar?

Not everyone will have such substantial meaning behind a kanji tattoo, but Grande does have a history of showing appreciation for Japanese culture. Grande was even learning to write in Japanese, which is no small task. But being busy or not being able to endure the pain of a tattoo is simply no excuse not to get this one right.

Grande clearly loves Japan’s kawaii culture and has integrated those visuals into her “7 Rings” music video, along with flashes of the kanji for “seven.” But her lack of regard for the accuracy of her tattoo makes the visuals in her video come off as more a fetishization of Japanese culture than true appreciation. And that’s what cultural appropriation really looks like: someone sees something from another culture they looks exotic and pretty, so they want to surround themselves with it, without really understanding it.

Tattoos can be a beautiful way to express yourself, but it’s also important to be careful not to take from other cultures in ways that aren’t respectful. Grande easily could’ve gotten this one right and shown her Japanese fans a great deal of love and respect. That she didn’t is the real issue with her tattoo.

This site uses Akismet to reduce spam. Learn how your comment data is processed.